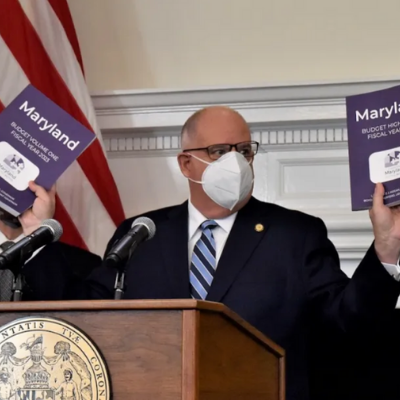 Governor Hogan’s 2023 budget proposal included a $58.2 billion spending plan that increased state education funding, expanded relief programs for Marylanders hit hardest by the pandemic, and included numerous tax reliefs to Maryland retirees. His budget was more than $8 billion higher than the initial expenditures he proposed in last year’s budget, due to federal stimulus funds and improvement to Maryland’s economy.

The approved budget provided historic levels of funding to help counties, businesses, and Marylanders most in need to recover from the pandemic. In addition, it included funding to the Blueprint, public safety programs, expanded Medicaid coverage, housing development and increased aid to higher education. However, changes made by the House and Senate decisions restored several cuts originally proposed by Hogan, including $29.8 million to support independent colleges and universities and $26.6 million for community colleges.

Total community college funding for the year is up more than 9% to $371.5 million. Within this session’s funding, G.S. Proctor was successful with advocating for its non-profit, business and education clients totaling over $1.5 million in the state’s approved Capital Budget Bond Initiatives. This will be the final year Maryland’s governor will have influence on the state’s spending.

Under current law, legislators are limited to reducing the governor’s expenditures for programs; after voters passed a constitutional amendment in 2020, the next General Assembly will have more power to move money between programs in state government. Passing a balanced budget is the legislature’s one constitutional responsibility. The 2022 approved state capital and operational budget are highlighted.